A fire in a hospital treating coronavirus victims claimed the lives of five patients and forced the evacuation of 150 people in the Russian city of St. Petersburg on Tuesday, further testing the Russian government’s response to the Covid-19 pandemic amid a growing crisis that has reached the Kremlin’s inner circle.The St. Petersburg fire broke out on the sixth floor of an intensive care unit at the St. George Hospital, killing five coronavirus patients connected to ventilating equipment, the TASS news agency reported, citing medical personnel.According to initial findings, the fire may have been caused by a short circuit in a ventilator or its malfunction, state news agencies said. The Investigative Committee, Russia’s top law enforcement body, said a criminal investigation had been opened into the matter.The grim news from St. Petersburg was quickly overshadowed by the disclosure that Dmitry Peskov, Russian President Vladimir Putin’s longtime spokesperson, had been hospitalized with coronavirus.Peskov told Russian state news agency TASS that the last time he had seen the President in person was “over a month ago,” but the news follows the hospitalization of Russian Prime Minister Mikhail Mishustin for coronavirus and is likely to intensify concerns about Putin’s own health.Tuesday’s fire in St. Petersburg was the second fatal incident in days involving a hospital treating coronavirus patients. On Saturday, a blaze erupted in an intensive-care wing of a Moscow coronavirus hospital, killing one person and forcing the evacuation of patients, Russian state news agencies and officials stated. 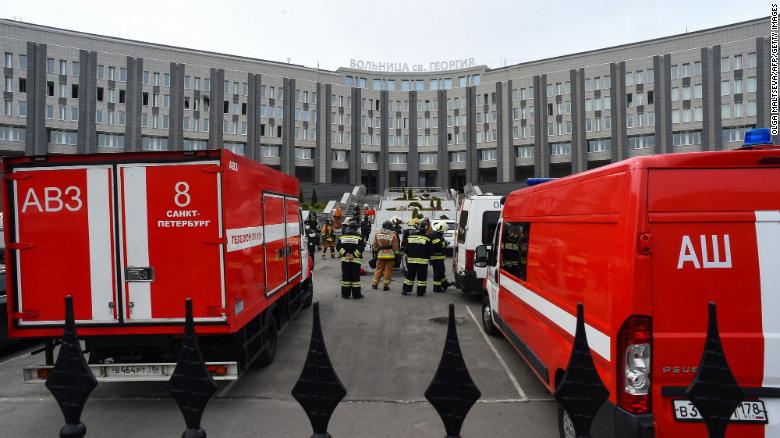 First responders work at the site of the fire Tuesday.While investigations are ongoing in both incidents, a law-enforcement official told TASS that officials were examining the ventilators involved in Saturday’s and Tuesday’s incidents, saying they were produced by the same Russian manufacturer.Those incidents occurred as the spread of coronavirus appears to be cresting. Russia on Tuesday reported 10,899 more coronavirus cases on Tuesday, bringing the total number of confirmed cases in the country to 232,243. The country is now ranked second in the world for confirmed cases, behind the US, according to Johns Hopkins University data. Moscow is the worst hit city in Russia, with 121,301 cases.

Coronavirus has become a cascading crisis for Putin. In March, oil prices collapsed after Saudi Arabia launched a price war against Russia, its onetime ally in energy markets. The immediate trigger was Russia’s refusal to sign on to an OPEC proposal to prop up oil markets by extending production cuts. Russia and Saudi Arabia subsequently struck a new production-cut deal, but oil prices — an important source of income for the Russian government — are still very depressed, having been battered by the slump in economic activity caused by the pandemic.That’s raised serious questions among Russia watchers about the Kremlin’s ability to respond to the economic fallout from the coronavirus pandemic. Putin is already under fire for refusing to tap a rainy-day fund created by previously high energy prices to revive the economy, particularly small businesses.In televised remarks Monday, Putin said his priority was “getting the economy back on track as soon as possible.

The information contained in this post is for general information purposes only. The information is provided by Putin's coronavirus crisis deepens with fatal hospital fire and spokesman's diagnosis and while we endeavour to keep the information up to date and correct, we make no representations or warranties of any kind, express or implied, about the completeness, accuracy, reliability, suitability or availability with respect to the website or the information, products, services, or related graphics contained on the post for any purpose.

household interior design
September 19, 2021 @ 10:43 AM
GET PROFESSIONALLY VIDEOS AT AFFORDABLE...