Award winning Ghanaian dancehall artiste, Shatta Wale and American singer Beyoncé have hijacked top five Twitter trends as most talked about personalities shortly after the release of the much anticipated Already music video.

The song which was released in 2019 as part of the ‘The Lion King: The Gift album’ by Beyoncé featured Shatta Wale, a feat which has been rarely achieved by any Ghanaian artiste.

Though Shatta Wale gave hints about shooting a video with Beyoncé for the Already song in an interview with Paul Adom Otchere on Good Evening Ghana in 2019, it was shot down as merely one of the several rants by the controversial dancehall artiste.

However, in a rather surprising turn out of events, a leaked video for the song emerged on social media which indeed featured Shatta Wale.

Shortly afterwards, Beyoncé announced plans to release visuals for not only her song with Shatta Wale but her entire project which includes ‘The Black Is King’ film which serves as a visual companion to the 2019 album The Lion King: The Gift album.

On July 30, 2020, SM fans and its entire affiliate were finally vindicated as Beyoncé dropped jaw dropping visuals for the Already song. And to add the icing on the cake, the Already song will be used as the official sound track for Beyoncé’s new movie, ‘The Black Is King.’

The overly joyous fans who cannot hide their joy have taken to their various social media handles to eulogize Shatta Wale.

A tweet read; “I think Shatta Wale‘s face should be on the 100gh note #AlreadyVideo.”

This is golden, this is a big win. Congratulations to Shatta Wale. Beyoncé sef feel your man #BlackIsKing #AlreadyVideo.”

Well, the ‘agenda’ boys have already taken their seats to remind the entire world that there is still a simmering tension between Shatta Wale and Sarkodie for which reason the fan base of the latter are unhappy.

One of such several tweets read; “Which group of people have been bleeding for 72hrs straight????? #AlreadyVideo.”

“Sarkodie fans will come and say Sarkodie made Beyoncé popular cos he quoted Shatta Wale’s tweet and Beyoncé was tagged in it #AlreadyVideo,” another read.

Find below the vusic video and more reactions from Twitter; 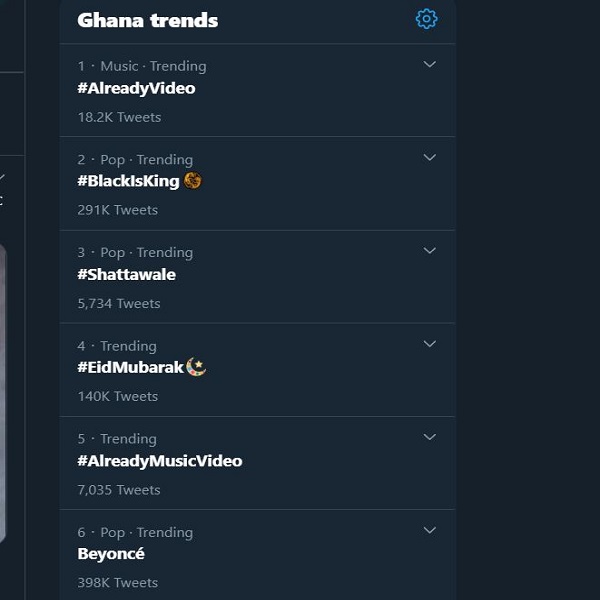 The information contained in this post is for general information purposes only. The information is provided by Shatta Wale, Beyoncé hijack top spots on Twitter trends after the release of Already music video and while we endeavour to keep the information up to date and correct, we make no representations or warranties of any kind, express or implied, about the completeness, accuracy, reliability, suitability or availability with respect to the website or the information, products, services, or related graphics contained on the post for any purpose.

Actor Van Vicker is wondering why cinemas remain closed while churches have been allowed to open for full attendance. This comes in the wake of…

Ghana striker Caleb Ekuban will be working with former Chelsea midfielder Eddie Newton at Trabszonspor, after he was appointed permanent manager of the Turkish club.…

Former Asante Kotoko defender, Godfred Yeboah has called on the current board of directors to do everything possible to acquire Ashantigold’s reject, Shafiu Mumuni ahead of their…